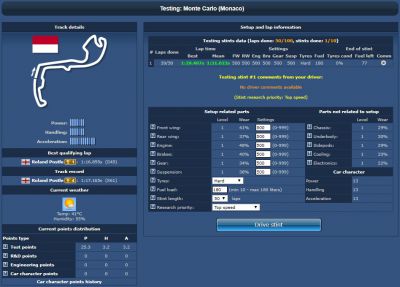 There are 9 different priorities that can be used when testing:

Each priority will earn you differing amounts of testing points in Power, Acceleration and Handling. Over the course of three races, these testing points will eventually be converted into "Car Character Points" (Power / Handling / Acceleration) which will increase the performance of your car.

The more laps you do within each of these priorities, the more testing points you will gain. The conversion rates of these points depend upon a few factors.

Why should I do testing?

You don’t have to but it is a good way to learn about the game, also testing brings improvements to your car and staff.

Does the test track ever change?

Usually a new test track is selected at the start of the season, and then the track is used for the whole season.

How does testing improve the car?

You will notice there are different types of testing, each works on a certain characteristic of the car – Power, Handling or Acceleration, others work on all characteristics. The laps of testing you carry out generate Test points. After the race these are converted to the next stage (R&D), then after another race engineering points and finally to Character points which are added to the cars existing PHA values. Note that Testing does wear the car.

If you are in debt you cannot test, also if any part of the car is over 90% worn the game will not allow you to test, you will need to update your car first.

How do I work out how much fuel I used in a test stint?

Before you did the stint you said the fuel level you wanted in the car, after the stint the fuel amount left is shown along with tyre wear and lap times.

Why doesn’t my driver give me feedback in testing?

The only time a driver will provide feedback in testing is when you select the testing type as setup tuning.