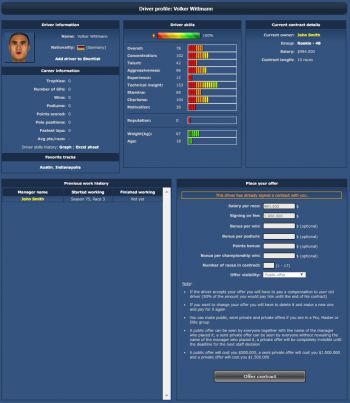 In Rookie your driver is your number one priority. He can very easily be the one factor that single-handedly changes your fortunes to finishing 1st instead of 15th. There may even be people who will dominate their leagues and earn promotion, simply because of their sensational driver without even bothering to upgrade their car. This of course is great, but extremely dangerous – as people who do this will be in for a rude awakening if they attack Amateur with a car 3+ levels lower than everyone else. By all means sign a fantastic driver – but please don’t let him earn promotion for you alone. Still continue to upgrade your car throughout the season (only when parts are worn out of course) and save cash whenever you can.

You will not find a driver who has a good rating for all his skills whilst in Rookie, but a driver with one or two skills will suffice and provide you with a promotion-worthy driver. Finding out which skills is part of the fun.

But how much do you pay these drivers? Well, as little as possible really. A lot of the time there will be huge competition for good drivers, so you may be forced to pay over the odds to get them – but generally a salary of $1mil to $1.5mil per race is reasonably high. Ideally, you should want to pay less than that.

This is a regularly misunderstood statistic, with new managers mistakenly thinking that one driver with 85 is obviously going to be "better" than one at 75.

That assumption would be a mistake - as driver Overall could simply be seen as an "Average" of the skills below. In simple terms, this means a driver might have an Overall of 85, but if that Overall is bloated by less desirable skills, then an alternative driver with a substantially lower Overall could actually be much better.

All drivers are made up of 12 separate skills and attributes as follows:

A good start is to try and find out what makes a good driver. One method is to search through some unemployed drivers and take a note of their statistics (in particular their career history). In the lower leagues there are some definite trends that you’ll notice between drivers that score a lot of points and those who don’t.

Please note: Drivers will slowly start to lose skills after they reach the age of 35.

I want to renew my driver’s contract, how do I do it?

You can renew a contract at anytime if the driver’s overall is below the group limit. You will pay the signing fee immediately, you won’t pay the new salary until the completion of the current contract. To renew, select the Driver Contract link on the main GPRO Office page.

I have renewed my driver’s contract, but the races left value hasn’t changed, Why?

Your driver will complete his existing contract with you then start the new one with you, the races left value will change then. Don’t worry, if he has agreed terms with you, you won’t lose him unless you relegate to a lower group and the driver overall is greater than that allowed for the group you are relegating to. The contract extension will appear in the office like this: Races Left: 8 (+17). However it will not appear on any other pages except the driver contract page.

My driver is over the group overall limit but I want to renew him, how?

You can’t, in future if you plan ahead its possible to renew the driver’s contract for a further 17 races as soon as you get him, then you can keep him for at least 34 Races.

My driver is missing, where did my driver go?

Either his contract ran out – you will have to sign a new one! Or you have been relegated and the Overall of your driver was too high for your new group.

I made a driver offer yesterday, when will he decide?