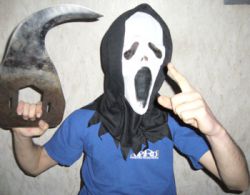 Mr Shadow is a special member of the GPRO Crew who is responsible for hunting double accounts and cheaters which lets the admins and developers focus more on improving GPRO rather than looking for double accounts. But who is hiding in fact behind the name Mr Shadow? If we tell you, we will have to kill you :)

Why did I get a message or email from Mr Shadow?

If you get a mail from Mr Shadow then it means you did something wrong and didn't play by the GPRO Rules. In such case please take the matter directly with Mr Shadow and do not bother to write to the admins. Mr Shadow's decisions are final!

Why doesn't Mr Shadow reply to my emails any more?

Mr Shadow will stop replying on a given issue when he considers the issue dealt with and closed. If that happens it is in most cases useless to write to him again. Do not try to contact the admins directly or befriend them on Facebook to attempt to discuss such issues further.

Why does Mr Shadow have a fake name and photo that does not show his face? Isn't that against the GPRO rules?

The reason is simple: his identity is to be kept secret since he is a very famous person and he doesn't want to spend all his time on signing autographs.